The premise of LOKALT 2015 is a noble one: gather artists based in and around Bergen to come together and show their work. Setting things in motion in Bergen Gamle Kretsfengselet (The Old District Prison) are artists spanning approximately three generations, ranging from recent art graduates to an inspiringly productive nonagenarian.

The organising principle of LOKALT 2015 – favouring residential locality over specifics of the work assembled – invites persisting cross-generational sympathies to emerge. This in turn has the potential of hindering the seductive currencies of contemporaneity (and perhaps also of ‘relevance’), momentarily sidestepping the atmospheres of consumption embedded within shifting cultural concerns. However, given that twenty-seven artists are exhibiting, the layout of the prison sternly opposes the realisation of such perspectives. As with previous exhibitions in the space, all of the work is faced with the problem of how it responds to the architecture and the lure of individually occupying a cell. 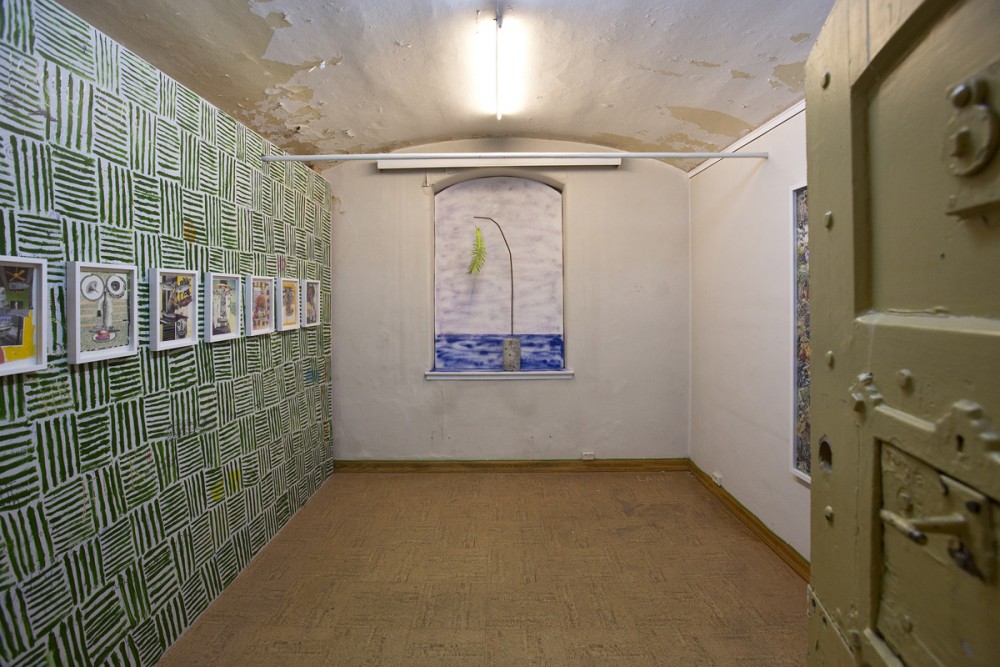 The organisers of LOKALT 2015 felt they could tackle this, placing a different artist in almost each of the available isolated cells. In doing so, veering the whole experience from a forum of mutual enrichment by way of correspondence between works towards something more akin to a showcase of Bergen artists. Some of the artists have tried to make the most of this, evidenced in the transformation of some of the cells into mini-galleries – Lasse Årikstad’s installation of sharp-witted paintings, collages, and sculpture, for example – whilst other work, such as Sissel Blystad’s Parkett, cunningly using publicity postcards of three examples of her work (all textile pieces from 2006) as elements arranged to cover the floor of her cell. Also offering the postcards for visitors to take, Parkett makes optimal use of the situation, subtly highlighting and prodding the showcase form whilst simultaneously arranging the intricately multi-coloured publicity imagery as a new flooring for the cell. There are many publications and catalogues to take, browse, or buy in ‘Lokalt 2015’, but Parkett’s reaches outside its cell without resorting to typical merchandising gestures. Saying this, however, I did break out my wallet upon perusing Laurie Grundt’s scrawled photocopied booklets, acquiring ‘Manifesto Summers Evening 2013’, ‘What is Reality’ (2015), and the dialogue ‘The Financier and the Soul’ (2015). Placed on a table in a room filled floor to ceiling with his paintings, the booklets by the ninety-two year old acerbically and inventively vent his anarcho-socialist sympathies through various literary forms, grappling with changes in global operations in doing so. 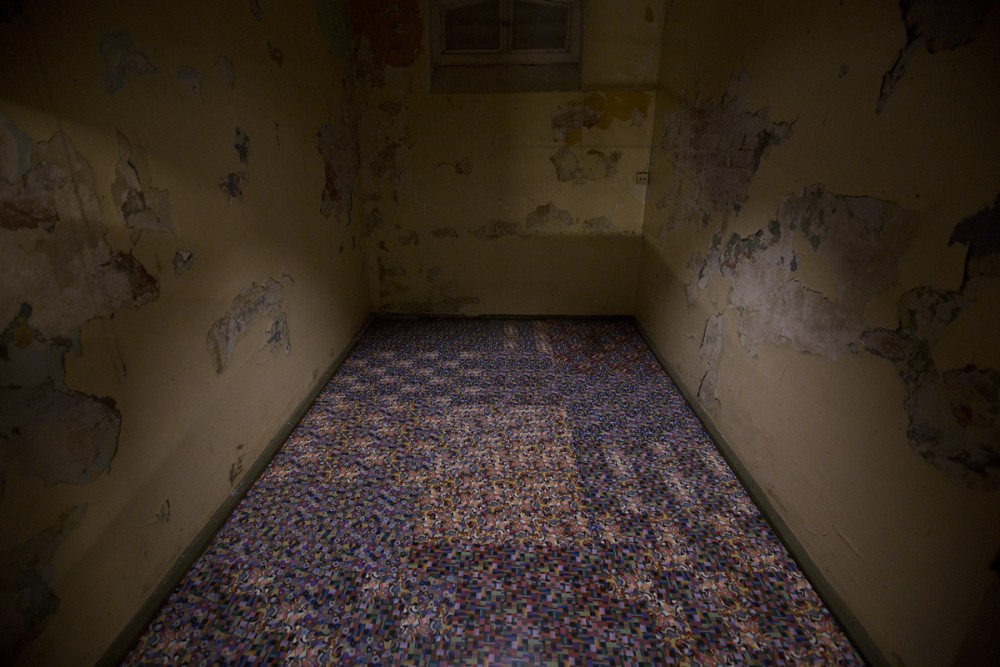 Other artists in the prison have chosen to tackle the imposition of the space directly. Anne Marthe Dyvi’s video Doing Time fleetingly coordinates a set of ideas parallel to the penitentiary environment and, along with Bjørn Kolbjørnsen’s Pietà, brings forward the theological overtones of a building originally seeking, literally, the repentance of sinners. Shot in Åna prison, Doing Time shows the labour of an inmate as he makes candles overlayed with a soundtrack of a conversation between the inmate and Dyvi. Pietà, on the other hand, consists of a hanging bulb illuminating a contemplative scene of a small easel-mounted painting and simple wooden chair, portraying an encounter within the devotional dynamics of disciplinary confinement.

I spotted the placard for Trond Lossius’ sound installation Lament for t. at the top of the stairwell between the two floors of the exhibition yet could not locate the loudspeakers or pick out sounds I didn’t think were part of the accretion of sound from the other cells (I later found out the twelve loudspeakers are placed out sight in the central space). I might not have listened carefully enough, yet even the positioning of the placard, stopping visitors within the clamor and inviting a search beyond what you have already heard, was effective in drawing attention to the space and the curious situation of twenty-seven artists most of whom are occupying their own prison cells.

Having had an extremely well attended opening, LOKALT 2015 is an exciting initiative to draw together work from different generations – this could happen more often. Yet, on this occasion, the almost total foreclosure of this possibility due to the rigidity of the setup in tandem with the choice of venue is a frustrating shame. Such potential for future gatherings is evinced by the more communal gestures of some of the work, inviting consideration of the emphatically social space outside of the private cloisters heavy with the penance of individual contemplation. 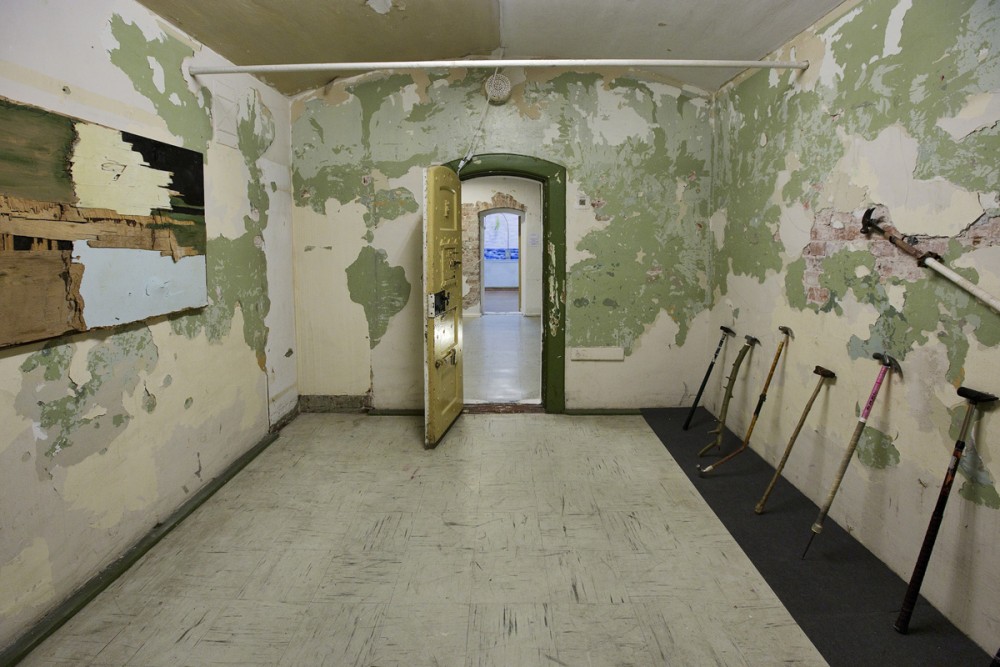 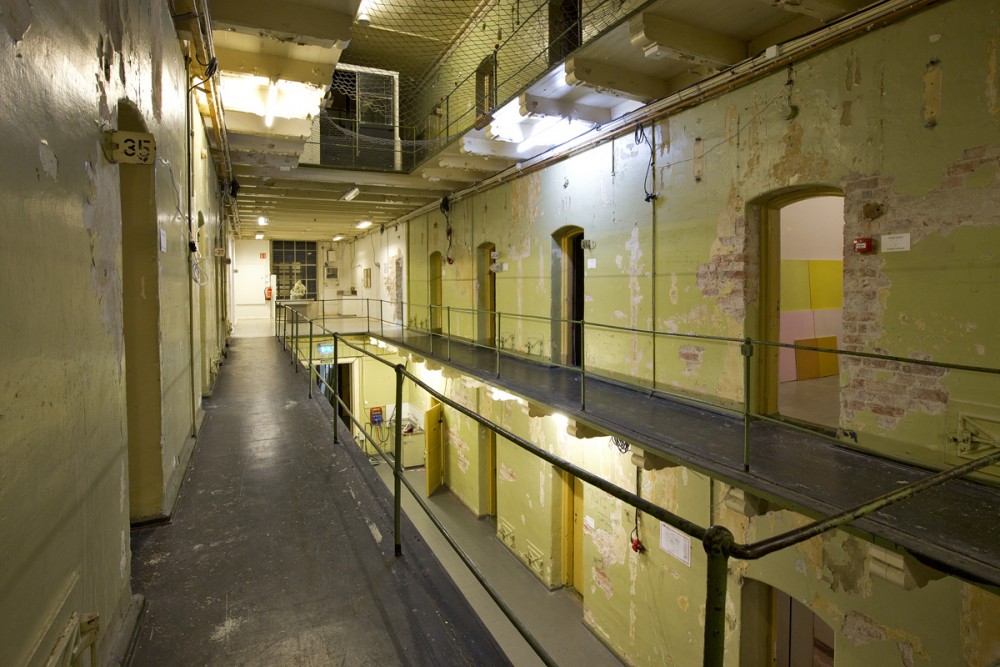